REGISTERING FOR OUR NEXT WORKSHOPS
WORKSHOP LIST
back
ANGELA ALLEN 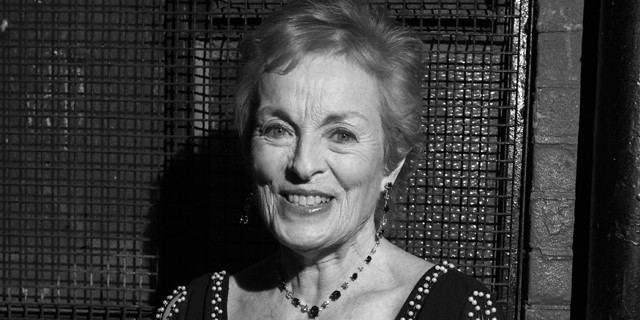 
ABOUT ANGELA ALLEN
Angela Allen was born in Maida Vale, London and after leaving school went to work for a theatrical agency. She had heard of continuity and since she had learn shorthand typing, a requirement for the job, she thought on doing it and started knocking on doors.

Her first job was at Isleworth Studios in “Night Beat” (Harold Huth, 1947) as assistant continuity girl when she was only 18. This was followed by “Mine own Executioner” (1947) and “Bonnie Prince Charlie” (1948), both directed by Anthony Kimmins.

After that, Allen got an uncredited job on the second unit of “The Third Man” (1949), working on the sewer unit. This is where she met Carol Reed, which she says was one of the best directors she ever worked with and her greatest teacher. The first feature she worked on alone was “Old Mother Riley, Headmistress” (John Harlow, 1950), starring Arthur Lucan and Kitty McShane.

Producer Sam Spiegel chose her for the job of continuity on “The African Queen” (John Huston, 1951). During production, Allen told Katherine Hepburn she would have to change her wardrobe to fit the previous scene to which she said ‘No, I don’t.’ The Director John Huston clarified the situation by stating ‘That’s Angie’s job, we will go with what she says.’ In the end, Angela was right which turned out to be the final push to get her career kickstarted. She worked with John Huston on other thirteen occasions, in films like “Moulin Rouge” (1953), “Moby Dick” (1956), “The Misfits” (1961) and “Wise Blood” (1979).

For services to the Film Industry, Allen became a Member of the Most Excellent Order of the British Empire in 1996 and received the BAFTA’s Michael Balcon Award for Outstanding British Contribution to Cinema in 2005.

Allen also helped to change the status quo of her profession in the UK. From “Continuity” (“Girl” was almost an understood) to “Script Supervisor” and to upgrade the tax category associated.


WORKSHOP DESCRIPTION
This will be the ultimate Script Supervision workshop, leaded by Angela Allen, one of the living legends in cinema, and one of the most important Script supervisors in history.

Angela will also bring another Script supervisor a speaker on the workshop, adding value to the participants experience with different point of views with another script supervisor still in activity.

In the workshop you will have the chance of not only receive this knowledge from Angela Allen, but also interact in a very strong way, as the group will have up to 25 participants, making it extremely interactive. You will also have the opportunity to assess the issues you encountered on your own work and the projects you have worked on or will work, and receiving the feedback to unblock situations in the future.


Bullet points and structure of the workshop:
1 A description of what the job of Script Supervisor means and its relationship to the rest of the team making a film.
2 Reading the script and noting down anything that does not appear to make sense.
3 Timing the script. Remembering to leave pauses when reading the dialogue. On the basis of the timing the script may have to be cut down.
4 Prepping the film. Re timing the latest script. Breaking the script down into Days and Nights and dates and times on each scene. Knowing when there can be clothes changes. When bruises and cuts can be altered or got rid of. What props are needed.
5 The “crossing the line”.. 180 deg rule.
6 Learning film jargon.. accepted phrases for description of shots etc
7 Understanding shot making.. i.e. how much coverage is needed.
8 Coverage… how much is needed.. depending on directors wishes and styles involved.
9 Screen direction… the looks… how looks should be shot.. i.e. whether they should be looking camera right or camera left.
10 Working with multiple cameras
11 How to Slate the film.. always to be discussed with the editor before shooting starts
12 Note taking. Each shot has to be described in detail. with all the relevant takes marked for Printing or Preference.
13 A daily log comprised of a one line description of the shot and relevant preferred takes marked. This is for the assistant editor to prepare the rushes or dailies for showing to the relevant people.
14 A production report for the Production Office has to be completed a the end of the shooting day. The information given by the Script Supervisor
is Time of Call. First shot. Lunch break, first shot after, end of shooting day. How many minutes and seconds shot, how many scenes completed and what parts of scenes have been shot. Page count. Setups shot by all cameras.
15 Usage of modern script supervisor programmes.
16 Equipment required, A computer and or I pad. Script Binder. Pens and pencils plus a ruler and an eraser. Notebook for note taking or plenty of blank paper to write your notes on and kept with the script in the binder.
17 The Script Supervisors relationship with other departments when they request help. The Script Supervisor’s primary responsibility and loyalty is to the Director.

PROFILE OF PARTICIPANT
The workshop designed for Script supervisors, Directors, editors, producers, screenwriters and Film Students, or anyone interested in entering the Film Business on the area of Script Supervision.


LOCATION OF THE WORKSHOP
London UK


16 hours
Duration: 2 days
Dates: 9-10 March 2019
Location: London UK
Price: 499GBP (349GBP with discount of 30% Until 6th of March)
Maximum number of participants: 25
By registering to the workshop you agree with FFL terms and Conditions